This is our first transparency report. It was already overdue, but since there wasn't much to report about it took us longer then expected. In this short report we publish how many law enforcement requests we received. We did not get any requests from intelligence agencies. This first report covers the time period from since we started running Tor relays until yesterday: 2018-02-21 - 2020-11-21

When interpreting the number of LEA (Law Enforcement Agency) requests, keep in mind that we are forwarding multiple Gbit/s of Tor bandwidth, and this report covers an extended time period during which over 60 Petabytes of Tor traffic got routed through our infrastructure. As of today, we are the 3rd largest Tor exit relay operator globally, accounting for about 5% of Tor's total exit capacity.

The following list shows the total law enforcement agency requests we received, grouped by the country in which the requesting authority is located (which is not necessarily the same country from where the request actually originated):

As a side note: It is not always trivial to tell whether an email comes from an authentic law enforcement agency due to the international nature of these requests, but we can answer all requests equally since we do not have any data anyway (no matter whether the LEA request is authentic or not).

We answer these requests by explaining what Tor is, and that we do not have any data or logs that would help to identify the actual user of the IP address at the time. No lawyers were involved or needed.

All requests reached us via email with one exception.

In October 2020, two law enforcement officers visited our office in Vienna and handed us an investigation order (not a search warrant - see below), from the public prosecution office which requested information related to one of our Tor exit relay IP addresses. Since none of our authorized persons were on-site to answer the request directly at the time, we had a phone call with them on the same day and after explaining that the IP address on the investigation order is used for an anonymity service (Tor) the situation was quickly clarified since they knew what Tor is already.

Since we had contact with the cybercrime competence center, acting on a national level in the past (they even were present at one of our past presentations about our Tor exits) and our IP addresses were known to them as Tor exit IPs already, we were a bit surprised by this visit. But the local law enforcement officers were professional, friendly and also so kind to explain the difference: In this case it was an European investigation order. A public prosecution office in another EU country contacted the public prosecution office responsible for Vienna, which then tasked the local law enforcement agency to investigate (unlike in the other international requests from outside the EU where the national cybercrime competence center handled the requests). 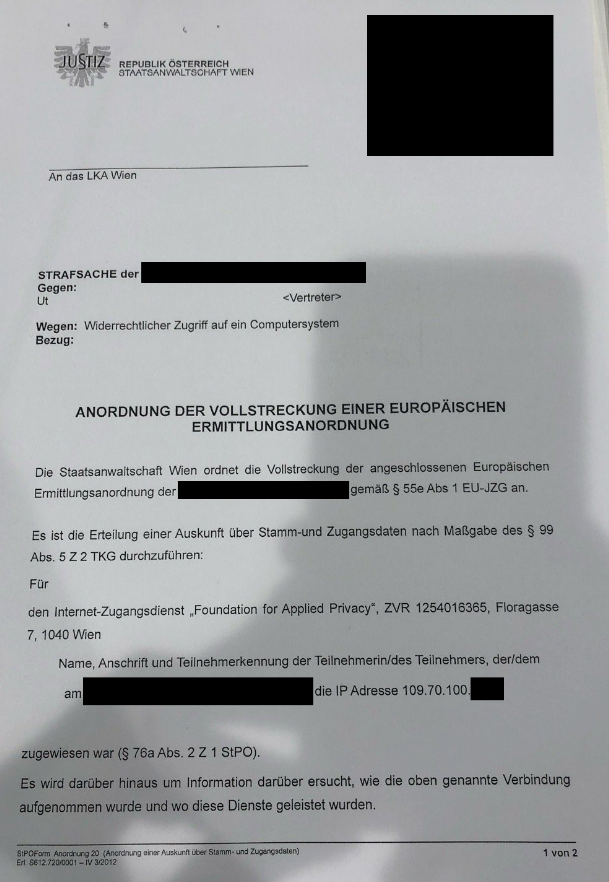 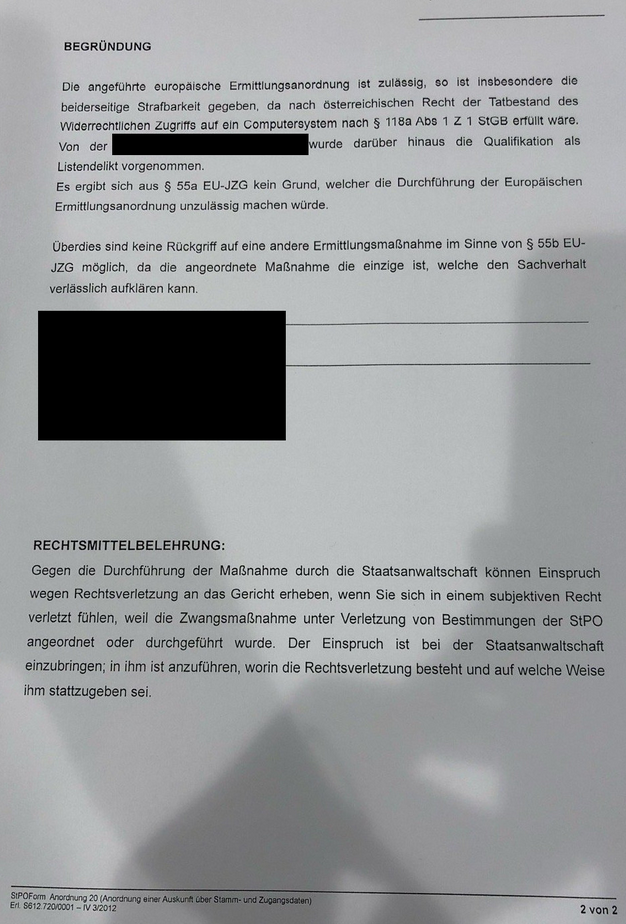 To meet Mozilla's policy requirements for DoH resolvers, we also publish the following numbers related to our DNS privacy service:

Do not hesitate to contact us if you have any questions. You can reach us at contact(at)appliedprivacy.net. Starting with this report, we aim to publish transparency reports on a yearly basis. If you want to support the operation of our privacy services please have a look at our donation page.

We are excited to literally announce our own Autonomous System :)

One week ago we started announcing AS 208323. On the same day we migrated our main Tor server to it. Here are some of the factors that motivated us to apply for our own ASN:

From a technical point of view we run BIRD 2 and Routinator 3000, but we are not entirely happy with the setup since BIRD on BSD apparently has some limitations (no support for privilege dropping, worse syncing with kernel table, no ECMP) so we might change OS or BGP daemon in the future.

Our ASN shows up on the Tor network top 10 ASNs already: 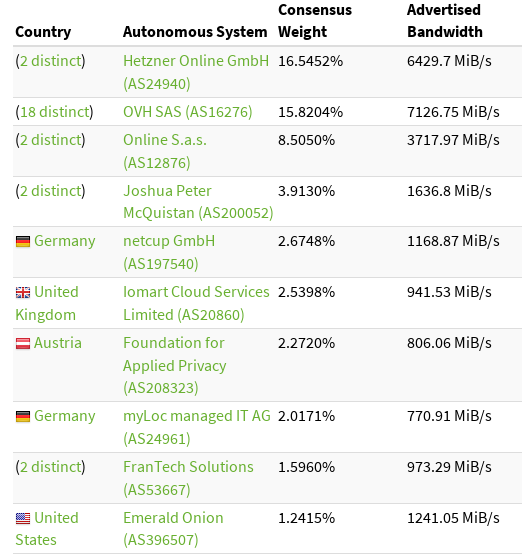 In the next few weeks we will deploy a RIPE Atlas probe and we are planning to join the MANRS initiative.

Thank you to everyone who made this possible!

tldr; Today we are launching our new DNS Privacy Services supporting the DNS-over-TLS and DNS-over-HTTPS protocols.

DNS is an old protocol that has been around for over 30 years. The scalability of DNS still serve us well even on today's internet size but the protocol is lacking confidentiality properties. With successful efforts like Let's Encrypt that significantly increased the share of encrypted HTTP traffic the cleartext nature of DNS is becoming more of an issue that needs to be solved since it is one of the few remaining ways how observers can learn the sites visited by an internet user. DNS traffic can reveal a lot about a user, it basically discloses the entire browser history at a domain level.

There have been multiple efforts to protect DNS traffic and in the last few years these efforts also included protocols that got specified in RFCs.

In 2016 DNS-over-TLS also known as DoT got published but its adoption remained relatively low and some implementations still have some significant deficiencies like establishing a new TLS connection for every single DNS query instead of reusing a connection for multiple queries to reduce the connection setup overhead. Luckily this is slowly changing, as an example Android 9 ships with DoT enabled by default. Even the default opportunistic mode that does not authenticate the TLS connection to the resolver is still positive progress. We hope to see DoT software evolve in particular with regards to connection handling and TLS authentication.

The second protocol, DNS-over-HTTPS also known as DoH, published in October 2018, has seen fast adoption particularly from browser vendors. Mozilla Firefox experimented with DoH already before the RFC got finalized. At this point users can opt-in to use DoH but Mozilla expressed intentions to enable DoH by default eventually. Google Chrome will also ship DoH support but does not have a user interface to enable and configure it yet.

From a pure protocol perspective we prefer DoT over DoH because it contains less unnecessary metadata (no HTTP and all the potential issues that come with it). We do support both protocols because we want to bring encrypted DNS to the users and at this point it is a lot easier to enable DoH in a browser than to install and configure additional software that talks DoT with the resolver.

And there is a small but important implementation-specific dependency: Firefox unfortunately requires using DoH for DNS to make use of encrypted SNI. You can not use ESNI while using a system wide DoT resolver because Firefox needs to retrieve the keys for ESNI via DNS and it only supports DoH for that (no DoT). ESNI (an active Internet-Draft) will close another loophole disclosing the visited sites at the TLS layer. The dependency to use DoH for DNS is not a requirement by ESNI but a shortcoming of Firefox and we are not sure whether this will change anytime (soon).

Some of the concerns voiced around DoH are not directly about the protocol itself but rather about the way how applications (mainly browsers) might select the DNS resolver since Mozilla partnered with Cloudflare to provide the DoH server capacity. Some other big players might simply fear loosing access to lots of DNS data that they got for free until now.

We share concerns about centralization but that should not be used as an argument against the protocol. It is important that DoH client sofware offers users an option to select their preferred DoH server and that more resolver operators offer DoH and DoT support, which brings us to the next point.

With browsers implementing DoH, the client portion is well covered, but for resolver operators the DoH software options are currently still looking dire. At the time of writing no major resolver software ships a released version with DoH support yet which makes it harder to offer and operate DoH servers but we like to hope that this will change within the next few months.

The actual goal behind all of this

Users should be able to browse the web privately without an observer learning all the sites they visit. Even with encrypted DNS this goal is not met yet. Observer can still learn visited domain names after a user enabled DoH or DoT due to information disclosed in TLS (SNI) but encrypted DNS is nonetheless a requirement towards protecting that information until the specification for encrypted SNI is completed and implementations are made available.

We operate public DNS Privacy resolvers in the following flavors:

(we do not offer plain DNS over UDP endpoints)

More details can be found on our service page.

A few months ago when we decided to offer DNS privacy services for the general public as our next privacy enhancing service we didn't anticipate the attention this topic is getting these days. We are glad DNS privacy is gaining traction.

If you would like to learn more about these DNS privacy protocols come to our talk "DoH, DoT, what? - An Introduction to DNS Privacy Protocols." at easterhegg 2019 in Vienna (19.04.2019).

Since we are collecting donations to help cover our costs for the privacy infrastructure we operate for you - the general public, we want to give you some insides on how much we collected and how much we spent. We would also like to encourage other similar organizations to publish comparable numbers.

So far we collected a total of 776 Euro since we launched until the end of November 2018. This includes donations and membership fees (excluding "internal" donations from the core team itself).

On the spending side we had a total of 2451 Euro of expenses.

This money was primarily used for our infrastructure providing privacy enhancing services to the general public free of charge.

With that money we routed a total of over 5800 TiB of Tor traffic (rx+tx).

So statistically speaking we pushed more than 2.3 TiB of privacy enhancing traffic for every Euro spent. This should give you an idea on how efficiently your donation is transformed into privacy enhancing services like Tor bandwidth and since our monthly throughput is still growing our cost efficiency is also expected to get even better next year.

Until the end of next year we are aiming to collect a total of 3000 Euros via donations and membership fees to help cover some of our costs.

Thanks for supporting the operation of privacy enhancing technology services!

After preparing this day behind the curtains during the past few months, we are glad to officially launch the Foundation for Applied Privacy today! We are a non-profit privacy infrastructure provider based in Vienna, Austria and we are passionate about privacy-enhancing technologies.

Our goals are to:

To achieve these goals we

With the launch of our organization we are also launching our first Tor Exit relay today. In the coming weeks and months we will scale up our capacity and look into additional privacy-enhancing services.

We will also be present at the PrivacyWeek, taking place in Vienna at the end of October 2018.

Stay tuned for additional exciting news that we will announce soon on this blog and via our Twitter and Mastodon channels.

If you like what we do please consider supporting us.